Feeling the need for a soothing day off, I spent the day the day pottering in the garden.

It’s such a wonderful time of year isn’t it?

Everything is so full of promise – look at these alliums bursting out of their buds! 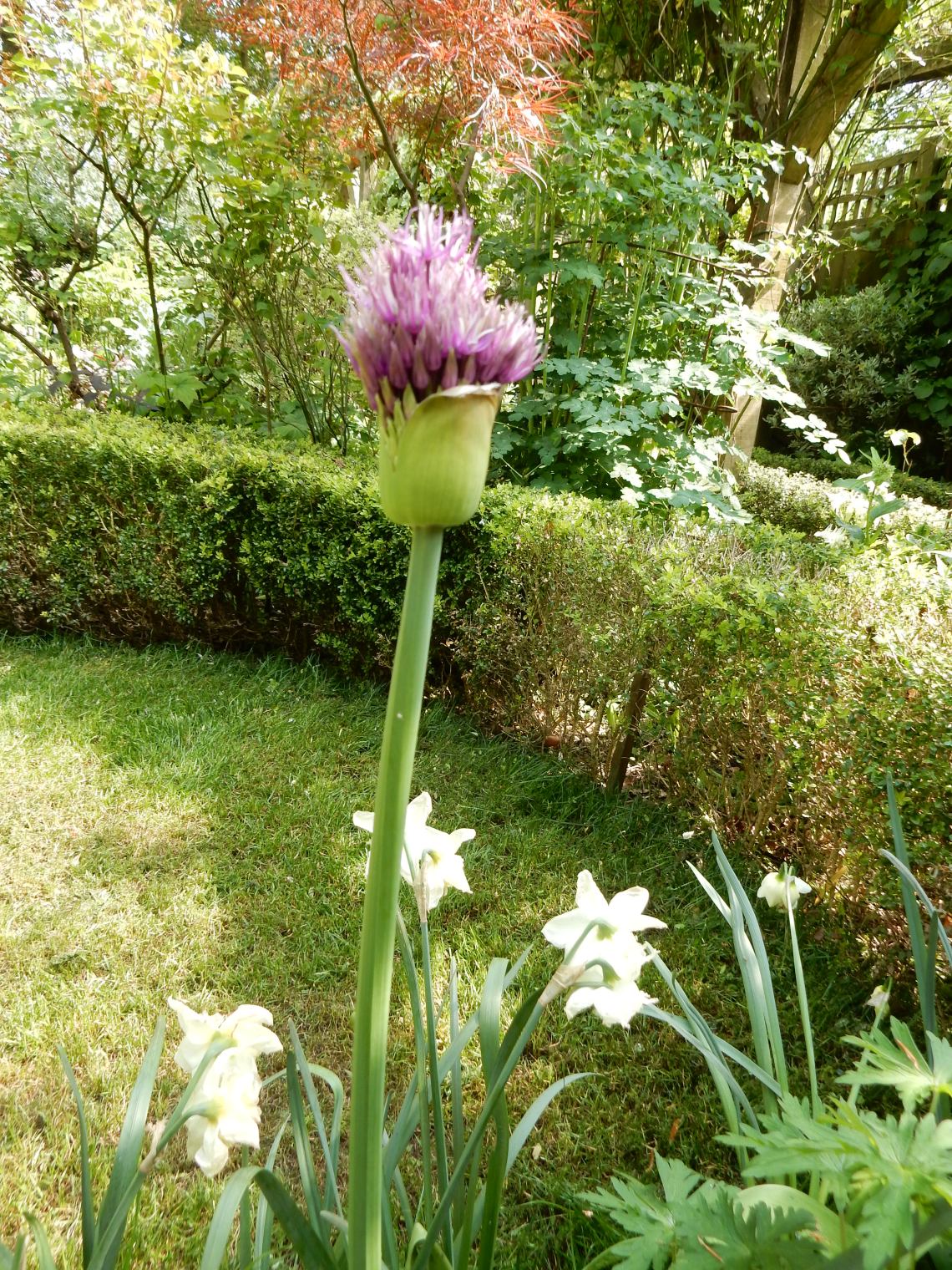 This year I’ve planted five different sorts and, since i’ve forgotten where I planted which, it’s all going to be a wonderful surprise!

After a while of pottering, I realised that the two things making me relax more than anything were the sound of the birds twittering in the trees and the sound of water.

Now, being a greedy sort of gardener, I actually have four sources of water in the garden- two are silent , except for the birds that make a racket in them , squabbling as they drink and bathe together:

The other two have sound, and are situated at either end of my little sanctuary here in the city suburbs, so wherever I go in the garden I’m always in range of their sound. The first one we put in only a couple of years ago: 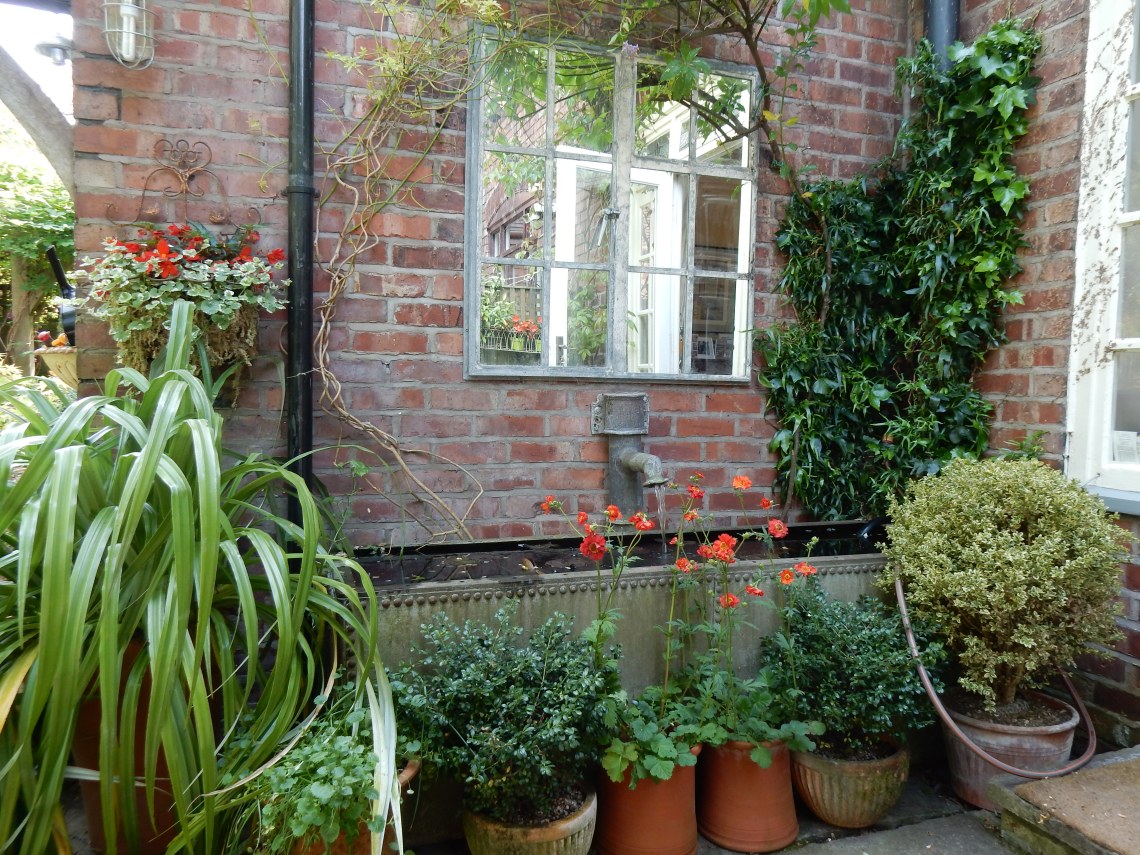 It’s an old cast iron animal drinking trough, found cheaply on Ebay. I just love those rivets along its front edge.We added a lead water pump, again an Ebay find, and an old Crittal window backed with mirror which really helps to brighten this east facing corner outside the kitchen door: 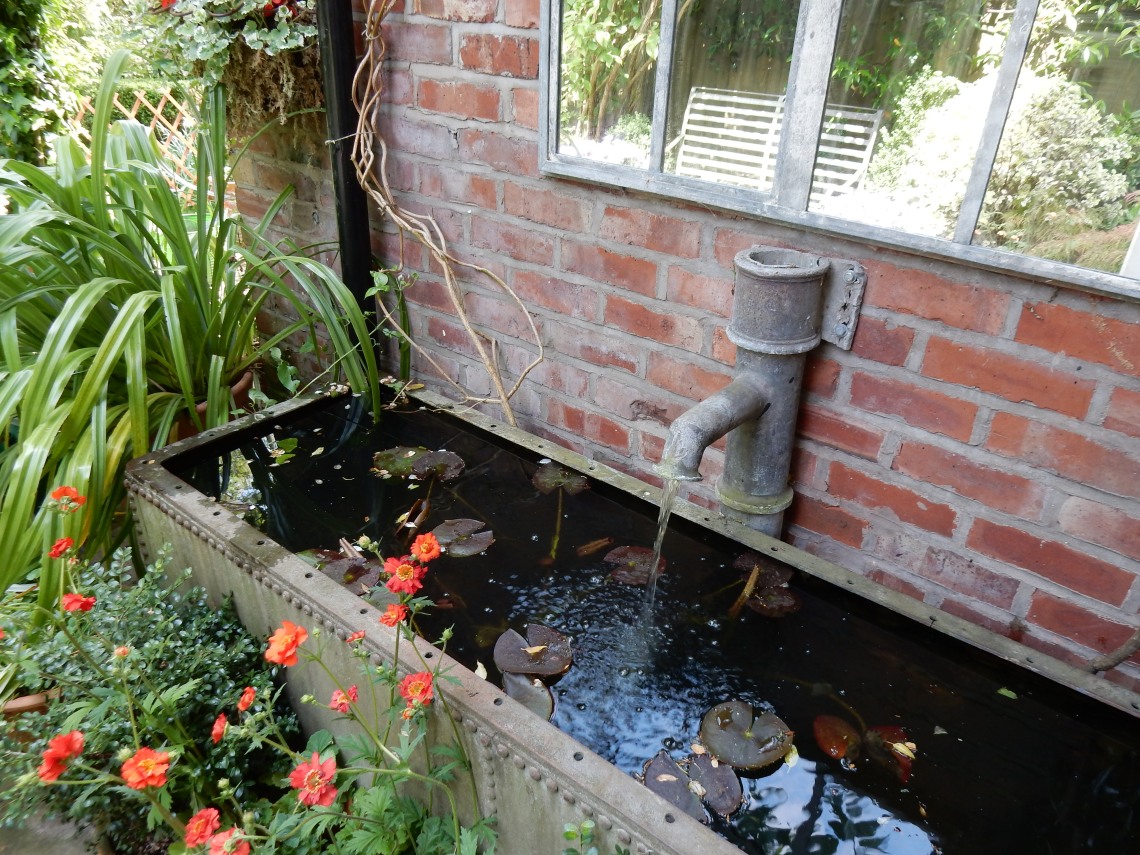 It’s incredibly useful as well as decorative, as we use it as a dipping trough, dipping our watering cans in it to irrigate the garden on hot days, with no tedious waiting for a tap to fill them.

But getting the sound right is really important. You must AVOID AT ALL COSTS the sound of a large horse urinating! Generally the smaller the pump, the more acceptable the noise. I regularly visit an otherwise beautiful garden that is completely ruined for me by the sound of the owner’s incontinent Shire horse that seems to follow us everywhere – it almost puts me off my tea…..

The other water feature is our pond at the darker end of the garden that is shaded by the park trees.

The light is reflected off the water’s surface bringing light and life into this area. I wanted to get the sound that water makes as it trickles through the ferny banks that you find at the sides of country roads in Wales and Cornwall.

So we put the outlet pipe at the top of a cascade of rocks and let the water trickle through them and into the pond. It really does sound lovely and soothing. And the view from our cosy summerhouse isn’t bad either. I might just nod off……….

Have a great weekend, full of the soothing sounds of early summer wherever you live.